A series of cod bycatch release experiments
were conducted in the Gulf of St Lawrence on board the Scottish Seiner "Mylene H". The results are indicated below.

Cod Bycatch Reduction / Scottish Seine Experiment
The search for solutions to high levels of cod bycatch in the Gulf of St. Lawrence continues to be a priority for industry and the New Brunswick Department of Fisheries and Aquaculture.

In an effort to conserve fragile cod stocks while still maintaining access to flatfish species, the Department embarked on a three year examination of various types of selectivity gear. Final trials were carried out in late 1997.

Experiments using an experimental Scottish seine were initiated in 1995, in conjunction with the Responsible Fishing Program at New Brunswick’s Caraquet School of Fisheries.

The 86 foot Scottish seiner ‘Mylene H’ captained by Pierro Hache was selected for the project.

Over the three years, an aggressive series of net and mesh modifications were carried out and tested and monitored by gear selectivity specialists from Nordsea Limited in Dartmouth, Nova Scotia.

Previous experiments have shown that square mesh is effective in screening out cod, but detrimental to the release of flatfish. The abrasive quality of mesh may also increase fish mortality.

Based on underwater camera footage, it’s known cod rise up after they enter the seine, and modified seines in Europe have shown decreased cod catches. To take advantage of the upward movement of cod, trials were carried out in 1995 using a seine with the square removed from the top of the net. The top was further reduced in 1996 by removing the first top belly.

The Caraquet based vessel deployed two seines; a conventional net, and one with the square, first top belly, and 20 feet of the second top belly removed. Each had 130mm diamond mesh codends and extensions.

The first experiment was carried out using the alternating tow method…first with the traditional net, then with the experimental net. Catches of flounder remained unchanged with the experimental net but cod catches remained stable also Tows were made in close proximity to one another to ensure similar depth and bottom profile. A standard Scottish seine was used on four other experiments, and included several newly designed escape holes and windows. These were covered and uncovered on alternate tows. (Insert drawing of different windows)

The lack of cod in Gulf area 4Tn forced the evaluation of traditional and experimental nets to be shut down early. Later trips from Cheticamp in area 4T1 allowed underwater video recording of various escape devices using the standard seine.

This video footage revealed cod exiting the inline diamond shaped holes in the last belly, and large volumes of fish travelling down the net to the codend. Data also showed that more American Plaice escaped during tows with large volumes of fish. Flatfish escapes were minimal during normal fishing.

Fish exiting through such large holes are less likely to receive abrasion than escapes through meshes, and this may reduce mortality rates.

An interesting note is how many American plaice swam in a sideways position. They were also seen swimming near the top netting, and trying to escape out the meshes on the top panel.

Using the two inline holes for escape routes, 82% of the cod escaped and losses of American plaice were acceptable

The continuing emphasis on sustainable harvesting and better selectivity gear is necessary for resource growth and the region’s economy. The leadership shown by the Province of New Brunswick, Caraquet School of Fisheries, and Nordsea Ltd., helps ensure a vital and prosperous fishery will provide for us today and in the future.

Data Based on 20 Valid Tows
The following is based on twenty valid tows (ten control, ten experimental) conducted on the Mylene H. 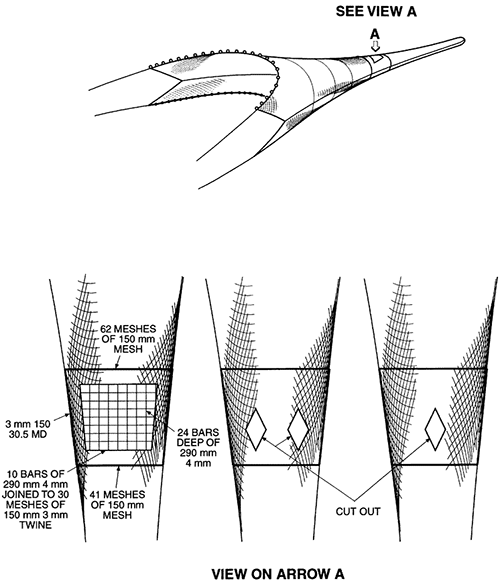 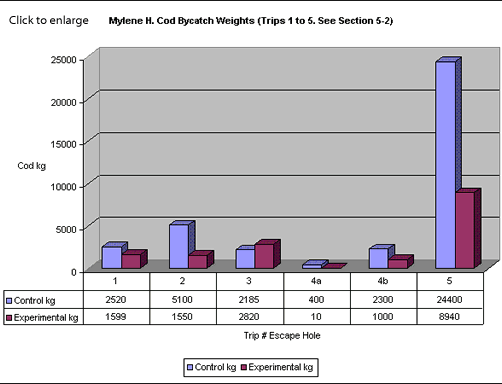