LOW FRICTION, HIGH ABRASION RESISTANCE
Without knots, Ultra Cross Netting does not have high spots to abrade on stern ramps, ship rails, net rollers, or even rough bottom. In the case of purse seines, the netting shoots very smoothly as there is no inter-knot friction.

LESS BULK and WEIGHT
Less twine is used to make the meshes, which in some cases can mean a savings of 50% of the raw material. Without knots, the bulk of the netting is also reduced. A single layer of Ultra Cross can replace two or three layers of double knotted netting, reducing bulk, weight, and improve the "fishability" of a net.

STABLE MESH SIZE
Knots can tighten or distort throughout the life of netting, dramatically changing mesh size. Hollow braided twines can hold sediment which not only wears on the twine from the inside, but also changes mesh size. Ultra Cross Netting maintains nearly 100% of it's original mesh size throughout the life of the product, does not hold sediment because of the 4 strand braiding process, and has no knots to distort.

PERFECT for SQUARE MESH APPLICATIONS
Ultra Cross Netting has proven to be the best material for square mesh and selectivity applications. The Danish Fisheries Institute, the Institute of Marine Research in Bergen, the National Research Institute of Fisheries in Japan, and many other fishery agencies around the world have endorsed Ultra Cross Knotless Netting as the ideal square mesh material. Ultra Cross is also used where size selectivity is important for onboard mechanized fish handling systems, where a specific size fish is targeted to maximize machine efficiency.

ENDS of STRANDS DO NOT FRAY
The unique four strand construction of Ultra Cross Netting produces a very stable twine. This twine resists fraying and broken bars do not unravel.

REDUCE DAMAGE to FISH
Ultra Cross Netting is very kind to fish with less bruising and abrasion from knots. This fact has been proven in many of the worlds' fisheries where product quality cannot be compromised.

LESS DISTORTION and TEARING
Distortion and tearing are major concerns in webbing. The four-strand braid construction of Ultra Cross results in a positive lock at strand intersections, virtually eliminating netting distortion and slippage of the intersections. Such a positive lock cannot be obtained with Twisted Cross Netting which utilizes a two-strand twist construction. Because of it's inherent stability and resistance to slipage, Ultra Cross is ideal for mesh size regulated fisheries, and is easy to repair even if a mesh breaks.

KNOTLESS netting has been around for many years but has never been as popular in many parts of the world as conventional knot­ted netting. Although knot-less is used extensively in Japan and elsewhere in the Far East, in many other areas knotless netting is frequently regarded with something approaching suspicion.

In spite of all its advan­tages, in the West knotless netting remains relatively little used except for special applications.However, the benefits of knotless as far as reducing drag is concerned are very clear and the differences in price can be misleading, giv­ing an enduring perception that knotless is considerably more expensive than conven­tional netting. There are also myths that knotless is weaker and more difficult to repair.

Conventional knotted net­ting has one significant prob­lem in that the knots present a weak point. Tie a knot in a piece of twine and the breaking strength is reduced by as much as a half - and this is just as applicable to twines that have been braided into netting because the strain on the fibres as they are twisted in a knot weakens them.

Knots are also where abra­sion occurs and where any problems with mesh slippage is going to happen.

With all this in mind, knot­ted netting has great advan­tages as well, as it is easier and quicker to produce. It has been dominant in the market ever since fishing nets were braided by hand, so the majority of fishermen and netmakers are much more familiar with it, finding it almost second nature to work with.

Price and weight
MANUFACTURING knot-less netting poses its own problems in that, instead of making netting from braided or twisted twines, the twines are also braided as the net­ting is made.

This makes the production process more complex than for knotted netting and is why knotless requires sophis­ticated production machin­ery. So, all this tends to be reflected in the price of the finished netting, although there are other factors that need to be considered when comparing the two.

Knotless netting covers more area for a given weight of netting than conventional netting and the difference can be significant. Bulk can be 50% or more with heavey small, a factor that becomes steadily less as meshes become larger and twine size becomes finer. This goes even further than simply replacing knot­ted with knotless, as the weak point of conventional netting is in the knot itself.

This means that, as well as reducing the bulk of the net­ting in the knots, smaller twine sizes can also be select­ed, leading to lower drag and -hopefully-reduced fuel bills.

Knotless netting also tends to be better on abrasion. Again, the knots are the weak point in normal netting. As a sheet of netting is repeatedly hauled across the deck or against a rusty ship's side, it is the knots that weaken first - and this is where meshes are likely to part first."The breaking strength of [knotted] netting in a slightly used Codend can be quite low, even though it may have started life as high strength netting, as the knots can be worn enough to weaken the netting, “says Ulrik Jes Hansen.

REPLACING knotted with knotless netting does more than simply remove the drag caused by the knots - it also removes the weakest point. So, this allows the use of finer twines as the breaking strength of the twine itself is no longer reduced by being knotted.

US east coast Net lofts are supplying UltraCross knotless netting practically as standard in codends, UltraCross netting in Dyneema is now being used increasingly in the bellies of the company's squid and whiting trawls. They have been using 4-ply UltraCross in 1.20 mm to replace netting in 3 or 3.50 mm knotted twines in trawls. The idea was to go for bigger gear before the fuel went so high but, now, we have been seeing some big fuel savings of as much as 15% in some cases. For the boats that are working on the margins, this really helps.

The manufacturer of UltraCross netting, tells FNI that the company is investing in a newloom to increase and modernize UltraCross pro­duction capacity. We are seeing a lot of UltraCross being sold for square mesh codends and that is really where it shines. It is stable and it lasts. Our 8.80 mm netting is being used to replace double 5 or 6 mm, giving better waterflow through the gear, with very few stickers," he comments. "Here the boats are using 169 mm inside mesh to meet the 6.50 in. mesh size requirement - and, on yel­lowtail flounder, what we have seen is that the fish are either in or they aren't. "We have found that UltraCross performs in a similar way on other fisheries and we have very few issues anywhere with sticking fish."

Knotless netting in pelagic codends has been a resound­ing success, according to customers in Iceland they have been using UC netting in nylon for several trawlers fishing herring, capelin and blue whiting, as well as knotless PE for redfish pelagic trawl codends.

The results have been fantastic. It's unbeliev­able how this netting lasts. HB-Grandi's trawler Venus used the same codend on redfish for seven seasons and only had to replace it when they lost their gear and then they ordered an identical codend as a replace­ment.

US trawlers fishing for Alaska pollock use this as well with 22 mm chains for rib lines. At the end of each season, they change the chains but keep the netting The pelagic trawlers Thorsteinn and Sighvatur Bjarnason have both been using UltraCross nylon netting in their codends and have reported good results. "The codend sensors light up quicker now and it's quite clear that the trawl is fishing better with this codend.

Ultra Cross 43 mm inside mesh has been supplied to Royal Greenland's shrimp trawlers and it has lasted exceptionally well. There is a price difference but, with fuel at the price it is, they see an improvement. The netting also lasts so much longer than anything else that, although its initial cost is rel­atively high, the long term cost is less than that of con­ventional netting."

Ultra Cross nylon and PE knotless netting, as well as the Dyneema UC Silver netting supplied to Royal Greenland has also performed extremely well. They have seen that shrimp trawlers using UC Silver in the belly have been replacing the conventional netting in the front sections of their trawls  every year, but keeping the knotless belly netting for a second or even a third year.

A growing number of Captains are now using Ultra Cross including Gilles d’ Entremont Captain of the Nova Scotia trawler "Lery Charles" has been using Ultra Cross exclusively on his trawls since the vessel was launched mainly because of its consistent mesh size, mesh stability and also providing superior fish quality.

Strong Dyneema fibers can be used to make low-diameter twines with reduced resistance in the water and lower drag to save energy and lower fuel consumption. Other benefits include towing a larger net or increasing Swept Volume and/or Swept Area using the same net size, or a reduction in door size. 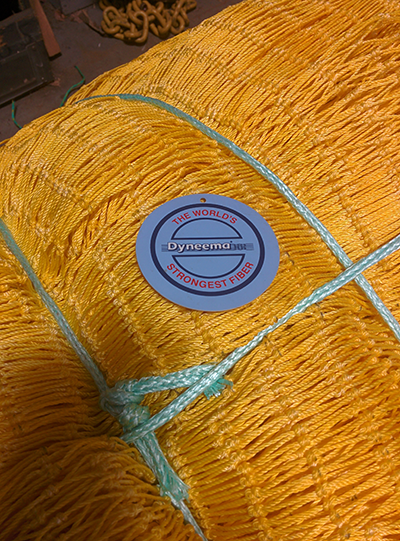 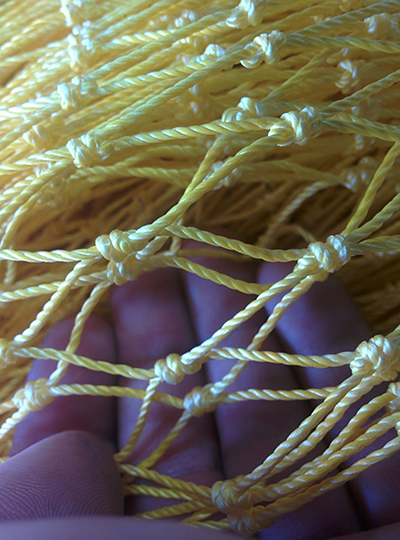 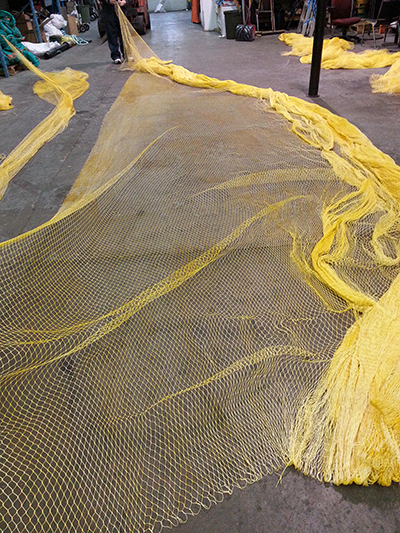 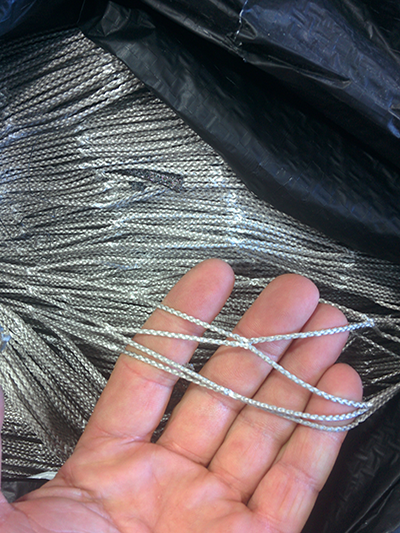 Apart from steel, there is no product used in trawl gear that can compete in strength with Dyneema, for instance the diameter of this twine at the same strength is always 50% lower, this factor has a major impact on the efficiency of the net. Wet knot strength is crucial Dyneema hardly loses its tenacity when wet, in contrast with the knots in Polyethylene, which lose about 20% of their dry knot strength.

The weight reduction is also substantial, Dyneema based netting weighs no more than about one third of a Polyamide or regular Polyethylene netting. The use of Dyneema netting twines in the whole net or in sections of the net will substantially reduce the resistance and the drag, and thus save energy. Preliminary studies indicate a Twine Surface Area reduction of approximately 40% using Dyneema in the wings, square, and bellies of a trawl.

Initial problems with knot slippage have been addressed by the use of double knots, recently one manufacturer has introduced a special knot, which when tested, gave even better knot security.

The following figures are claimed by manufacturers: